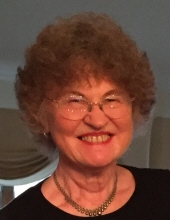 Mavis Smed passed away October 16, 2022, at Good Shepherd Health Center. A celebration of life will be held at a future date to be determined.

She married Kai L Smed in 1958 after a whirlwind 6-month engagement and had 2 children. They shared almost 62 years of marriage, making their home in Mason City and Washington State along the way. During these years, she worked in the home and volunteered as a Cub Scout den mother. She later returned to outside employment following her children leaving for college. She was employed by Quick-Tec Printing, Unisys, and Minnesota Rubber before officially retiring.

Once retired, she focused her time on helping to care for her grandsons and gardening. Mavis shared her husband’s love for landscaping and horticulture, creating and tending an elaborate environment of plants and flowers inside and outside the home. She also enjoyed artistic endeavors such as macramé and needlepoint and was a skilled cook and baker in the kitchen.

To send flowers to the family in memory of Mavis D. Smed, please visit our flower store.