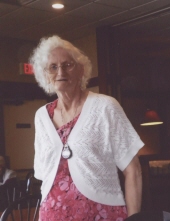 Visitation will be held one hour prior to service time on Monday.

Memorials may be directed to the family of Mary Rowe-Leverne.

Mary was born on June 6, 1937, in Millerton, IA to parents wayne & Ethel (Dubble) Rowe. Mary was 1 of 7 children. In 1956, Mary met and married Kester Robbins Sr. to this union together they had two children, Kester Jr and Maryann.

Mary enjoyed traveling with the Davidson United Carnival during the summer months. Mary worked for over 45 years in the cotton candy wagon. Mary had many fond memories of working with her carnival friends. As quoted by Nancy Davidson on a t-shirt, “Mary, one of God’s very special persons, he put on earth”.

While working with the carnival, Mary met Russell Leverne. They were married on December 10, 1987. When Russell was on the road driving truck, Mary was a stay-at-home wife except when traveling with the carnival during the summer months. Russell was the love of Mary’s life. Mary stuck with Russell through all the good times and tough times.

After retiring from the carnival work, Mary was a caretaker in her home for her good friend, John who had suffered a stroke. Mary and John met while working the carnival together.

Mary was an active member of her church, Grace Evangelical Free Church. She helped her daughter, Maryann, set-up for communion many times. Mary faithfully attended church even after her decline in health.

As Mary’s health declined, she became a resident of the Good Shepherd Health Center in April of 2018.

She was preceded in death by her parents, her son Sam at a young age and four siblings.

To send flowers to the family in memory of Mary Rowe-Leverne, please visit our flower store.