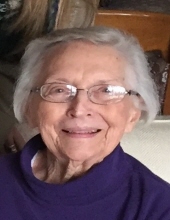 Mary Powell, 90, of Mason City, IA, passed away on Wednesday, July 4, 2018, 3 months after her husband, Bob Powell, at Good Shepherd Health Center. Per her wishes, her body was donated to the University of Iowa in Iowa City, IA. Memorial services will be held at 4 PM Friday, August 3, 2018 at the First Congregational United Church of Christ, 100 1st St. NE, with the Pastor Chuck Kelsey officiating. Memorials may be directed to the First Congregational United Church of Christ.

Mary was born to Louis & Bertha (Brooks) Kling on November 21, 1927, on the family farm, in Kellogg, IA. She was the fifth of six children. She was the last survivor of her siblings. Mary began her education at a nearby country school with her sister, Grace, as her teacher. She graduated from Newton High School in 1945, and continued her education at the University of Iowa, intending to go to medical school. Meeting a very handsome medical student who caught her eye in the medical library, however, changed things forever. Mary and Bob were married on August 28, 1948, in Iowa City, IA. They honeymooned at Fillenwarth Beach in Okoboji, IA. Mary and Bob went to a number of communities for Bob’s internship and residency, and finally, ended up back in Bob’s hometown of Mason City, IA, in 1956 where Bob began his Psychiatry practice. By this time, Mary and Bob had 3 sons, Randy, Jeff, and Greg. Their last child, Anne came along in 1957, at which time the family was complete. Mary was very active in First Congregational Church, her P.E.O. chapter IW, and her Bridge Club. In 1959, Mary designed and had built their home on Kentucky Court in which they lived until 2013. She was proud to call herself a farm girl, she learned to drive on a tractor, and as a homemaker always had a productive garden. Pets were an integral part of the Powell home, including dogs, cats, guinea pigs, and even a salamander. She enjoyed spending time with her family, especially her grandchildren, whom she invited for weeks during the summer. Her pie crust recipe is literally called “Perfect Pie Crust,” in the church cookbook and it lived up to the name. Mary and Bob travelled many places around the world during their retirement years, including China, Russia, Bavaria, Africa, New Zealand, among others. Mary enjoyed reading, playing bridge, listening to and watching the news, watching Hawkeye basketball and football, going to Birdsall’s if Bob was there, gardening, listening to the farm reports, and exploring nature of all kinds, especially birds.

She was preceded in death by her parents; 2 brothers, 3 sisters; husband Bob; and son: Greg.

To send flowers to the family in memory of Mary Powell, please visit our flower store.