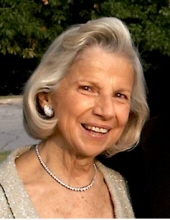 Mary Louise Pappajohn, 88, passed away March 17, 2022, in Naples, Florida with her family by her side. Mary was born October 6, 1933, in Minneapolis, Minnesota to Michael and Mariana (Bougris) Limberis. She attended the University of Minnesota obtaining a B.S. in Home Economics in 1955 and after graduation she worked for Northern States Power in Minneapolis as their kitchen design expert. Mary relocated to Iowa upon her marriage to John George Pappajohn on September 10, 1961, and became an active member of the Des Moines community. She served as President of the Junior League of Des Moines, President of Goodwill of Central Iowa, and President of the Des Moines chapter of the Daughters of Penelope. Mary’s true passion was the visual arts, and she used her extensive knowledge to qualify the Pappajohn’s personal collection on Art News Magazine’s Top 200 Art Collectors in the world for fifteen consecutive years. In addition to her comprehensive collecting, Mary served on the Board of Trustees of the Des Moines Arts Center, as well as Chair of the Acquisitions Committee. She also served as a trustee of the Walker Art Center in Minneapolis, on the Advisory Board and National Committee of the Kennedy Center for the Performing Arts, the National Committee of the Whitney Museum, and the Collectors Committee of the National Gallery of Art in Washington, DC. When they ran out of space to display their sculpture, Mary and her husband established the John and Mary Pappajohn Sculpture Park in Des Moines through the donation of their entire outdoor sculpture collection which included over twenty world renowned works relocated from their home to the Western Gateway Park. A true philanthropist in every sense of the word, she truly lived to serve others. Mary was recognized with numerous awards and honors, including the Meredith Wilson Heritage Award, the Des Moines Bravo Award, the Des Moines Art Center Gala Honoree, the Hellenic Times Humanitarian Leadership Award, the State of Iowa Philanthropist of the Year, and the National Philanthropist of the Year for the Arts. Among her many other philanthropies, Mary helped in creating an endowment at the University of Iowa hospitals to establish the John and Mary Pappajohn Clinical Cancer Center. She helped finance scholarships for ethnic, disadvantaged, and minority students. She helped fund the five John Pappajohn Entrepreneurial Centers in Iowa, and contributed to the John and Mary Pappajohn Higher Education Center in Des Moines, IA. Mary was a parishioner of the Saint George Orthodox Church in Des Moines, and a supporter of the Holy Transfiguration Greek Orthodox Church in Mason City and her hometown parish of Saint Mary’s Greek Orthodox Church in Minneapolis. Additionally, she was a member of the Archbishop Iakovos Leadership 100 endowment, and a major supporter of the Saint Nicholas National Shrine at the World Trade Center. Mary was a phenomenal cook. She enjoyed entertaining friends and family and possessed a great collection of recipes including many Greek specialties. Among the favorites was her Waldorf Astoria red velvet birthday cake. Mary was adored and loved. Her generous heart and passion to live life will live on forever. She was preceded in death by her parents and brother Tom Limberis. Mary will be deeply missed by her husband, John, daughter, Ann (RJ), grandchildren, Nicholas and Alexandra and many many friends. May our dear Yiayia Mary Rest in Peace and May Her Memory Be Eternal. In lieu of flowers, donations can be sent to the Des Moines Art Center in remembrance.

To send flowers to the family in memory of Mary Louise Pappajohn, please visit our flower store.