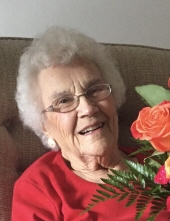 Mary was born July 10, 1925, in Worth County, Iowa, the daughter of Delbert and Olive (Davidson) Dunton. She attended rural schools in Worth and Cerro Gordo counties and high school in Rock Falls. Before her senior year, her family moved to Swaledale where she graduated from Swaledale High School in 1942. Following high school, Mary worked as an operator at Northwestern Bell in Mason City until her marriage to George (Jay) Hansen, Jr. on September 20, 1946, at the Methodist parsonage in Plymouth, Iowa. She and Jay raised two daughters while she worked for 18 years as secretary for the Rock Falls School and board secretary for the Nora Springs-Rock Falls Community School.

A graveside service will be held at the Rock Falls Cemetery in Rock Falls at a later date. Those who wish may donate memorials to a charity of your choice.

We extend our deep appreciation to all family and friends who were able to stop for a visit, lend a helping hand, send a card, or give her a call over the last couple of years. We are also grateful for her kind care givers.

To send flowers to the family in memory of Mary Louise Hansen, please visit our flower store.