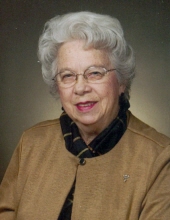 Mary was born July 16, 1922 in Corwith, Iowa to Elry Clifton Gourley and Austa Ellen (Galloway) Gourley, the second of seven children. The family moved to a farm SE of Mason City in Portland Township in 1935 when Mary was 13. She attended country school in Corwith and Portland area before graduating from Mason City High School in 1940. She married Floyd H. Woodward of rural Portland Township on October 31, 1940 at First Presbyterian Church in Mason City. They had two children, a daughter, Genee Annette on July 7, 1943 and a son Craig Allen on December 8, 1944.She spent the majority of her life as a farm wife. In 1960 she and her husband purchased and ran Tall Timber Resort on Lake Kabatogama, near International Falls, Minnesota. They ran the popular fishing resort until 1969, when they returned to their farms full time.

She was a member of Wesley Methodist Church in Mason City for 83 years (she also attended Lake Kabatogama United Methodist Church when in northern Minnesota at the resort), a member of Eastern Star, Wesley Methodist Ladies Circle and a farm wives club “The Happy Hustlers” of Owen and Portland Townships for many years. She was active in the Lake Kabatogama Resort Association, volunteered time and services to area 4-H projects and the North Iowa Fair. She worked at the cosmetics counter at Houck Drug in Mason City and later sold Avon products in the area.

She dearly enjoyed her family, friends and made casual acquaintances and strangers feel welcome. She was a fantastic cook, could hang wallpaper, sew, do field work on a Farmall, reconcile business ledgers, and extract Walleyes from Minnesota lakes with the world’s best anglers. She enjoyed playing cards and board games and loved skunking her grandchildren at cribbage. She loved all music and enjoyed playing piano and her organ for her own enjoyment and for groups of family and friends. She had lush vegetable gardens, canned, made jams and jellies that were enjoyed by many. She enjoyed dancing and tap danced in her youth (her father bought her tap shoes to help her strengthen her legs after she contracted a mild strain of Polio as a small child). She and her husband enjoyed traveling and made trips to Alaska, Hawaii, and they wintered north of Dade City, Florida for many years in their retirement.

Memorial contributions can be made out to the Mary Woodward Memorial Fund.

To send flowers to the family in memory of Mary Jeanette Woodward, please visit our flower store.