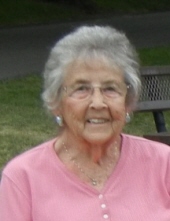 Mary was born July 2, 1929, the daughter of Dean and Marjorie (Moore) Glanville in Mason City, Iowa. She grew up in Mason City and Ventura Heights. Following the death of her father Mary, her sister Jean and their mother moved to Oregon City, Oregon to live with their grandparents. After the war ended, they moved back to Mason City where Mary completed high school graduating in the class of 1947. Shortly after graduation Mary began working at the telephone company and later at the bank.

On September 16, 1950, Mary was united in marriage to William Stoynoff, the couple lived in Clear Lake for a while before moving to the family farm in Ventura. Mary then went back to work when David started kindergarten as a cook in the Ventura Elementary School and continued working there for the next 35 years.

Mary enjoyed a wide variety of crafts, from crocheting to doll making, reading westerns and sukodu. Her most cherished time was spent enjoying her family.

To send flowers to the family in memory of Mary E. Stoynoff, please visit our flower store.