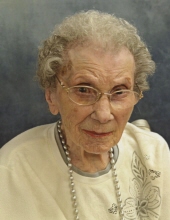 Visitation will be held one hour prior to service time on Saturday.

Memorials may be directed to the United Methodist Women, 119 South Georgia or the Lime Creek Nature Center, 3501 Lime Creek Rd.

Mary was born May 8, 1918, the oldest of four children, to Lloyd A. and Della B. (Witter) Clay in Marble Rock, Iowa. She grew up in Marble Rock and Shell Rock, Iowa. Her family moved to Mason City in 1934 where she graduated from Mason City High School in 1935. She was married to Harlan F. Saug on July 30, 1938. They had two children, Pamela J. and Lawrence D., and lived for many years on an acreage east of Mason City. Her husband passed away on March 23, 1974.

Mary had a strong faith in Jesus. She was a long-time member of the First United Methodist Church and was active in women’s circle. She also volunteered for visitations at local care centers and was a church librarian for twenty-five years. Mary was a member of Wa-Tan-Ye, holding many offices, and at the time of her death was the oldest living member of the Social Hour neighborhood club. She was also a 4-H leader for several years. Following her husband’s death, Mary worked at the City Assessor’s Office until her retirement.

Mary enjoyed knitting and socializing with others. She is remembered as being gracious, a great hostess and always putting others needs before her own. In earlier years she was always ready to participate in family activities including traveling, fishing, skiing and helping with many 4-H projects. After retirement she enjoyed traveling with many of her friends. In later years she shared many activities and family events with friend William Oleson who passed away in 2007.

Mary was preceded in death by her parents Lloyd and Della Clay; her husband Harlan Saug; and siblings Kathryn Andon, Charlotte Sinnott, and Max Clay.

To send flowers to the family in memory of Mary E. Saug, please visit our flower store.