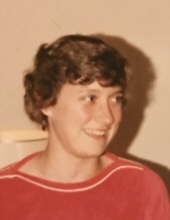 Mary E. McCollum, 57, of Mason City passed away Friday, November 23, 2018 at the Muse Norris Hospice Inpatient Unit in Mason City after a short battle with cancer. She is finally free from her long struggle with schizophrenia.

Private family service will be held at a later date.

Mary Elizabeth McCollum, the daughter of Clarence and Bertha (Haberer) McCollum, was born January 5, 1961 in Mason City. She is survived by her brothers, John, David (Angela) and Pat (Donna) McCollum; sister, Marsha (Phil) Touhey; sister-in-law, Lila McCollum; and many nieces and nephews.

She was preceded in death by her parents; Mac and Betty; and brothers, Mike, Tim, Ray and Sid.

To send flowers to the family in memory of Mary E. McCollum, please visit our flower store.