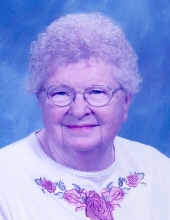 Mary Ann Druschel, the daughter of William Emil and Fannie Bernice (Gettemy) Druschel, was born on October 30, 1930, on the family farm in rural Rockford. She graduated from Rockford High School in 1949. Mary Ann was united in marriage to Glen “Bud” Hayward on November 25, 1952, at the United Methodist Church in Mason City. Mary Ann worked for the Department of Agriculture, for 35 years, until she retired in 1985. In 1991, Mary Ann and Bud moved to Kimberling City, MO for their retirement years. Upon Bud’s passing Mary Ann moved to Springfield, MO where she made many new friends in a retirement community. In 2017, she then moved back to Iowa to spend her lasting days.

She was preceded in death by her parents, her husband Glen “Bud” Hayward, their son Dennis Hayward and other family members.

To send flowers to the family in memory of Mary Ann Hayward, please visit our flower store.