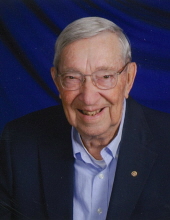 Memorial services will be held at 10:00 a.m. on Saturday, May 11, 2019 at the First United Methodist Church, 119 S Georgia, with Rev. Dan Fernandez officiating.

There will be a gathering of family and friends one hour prior to the service time.

Memorials can be made out to the family of Marvin Schlutz.

Marvin was born April 22, 1928 in Thornton, IA, the son of Henry and Dena (Riekens) Schlutz. He graduated from Thornton High School and Hamilton Business College in Mason City, IA. Marvin began working for Carroll Sales Company, a wholesale feed and oil distributor, in 1947. In 1950 Marvin was drafted into the army and was a member of Headquarters 24th Infantry Division. He was presented the Commendation Ribbon with Metal Pendant for meritorious achievement in Korea. After two years of service he returned to his job at Carroll Sales.

Marvin met his future wife Jeanette White at Carroll Sales Company. The couple married on September 3, 1950 in Plover, IA. They had three children: Debra, Steven, and Patti. Marvin and Jeanette made their home in Mason City and lived in the house they had built for 65 years. Jeanette was the love of his life and they enjoyed doing almost everything together.

Marvin was an environmentalist, a conservationist, and a lover of nature. He planted a tree farm of 5000 tree seedlings on his acreage south of Portland through the Cerro Gordo Conservation Program. Seven acres of land were seeded with wildflowers and he also devoted a small part of the acreage to apple, cherry and peach trees. The land is a designated natural conservation and wildlife area. He pursued his interest in beekeeping by taking a beekeeping class at NIACC and then establishing several of his own hives. One of his favorite activities on the farm was driving his vintage Super-C Farmall tractor.

Some of his other hobbies and interests included carpentry, woodworking, music, archaeology, bird-watching, and fishing. He loved a great meal and good conversation, grilling outdoors, and Sunday afternoon drives in the country. Marvin enjoyed traveling, meeting new people, and learning about different cultures. Highlights were trips to England, Ireland and China. He especially looked forward to his annual fishing trip to the Kississing Lodge in Canada. He was also a proud participant in the Honor Flight to Washington D.C. Marvin was a member of noon Rotary and made many friends there. He was also president of Feed Distributors, Inc. and president of NIACC Dormitories for many years.

Marvin was an active member of First United Methodist Church and enjoyed serving on the finance committee and ushering. Several years ago he was part of a church mission group that went to the Rosebud Reservation in South Dakota to help with building repairs. When Marvin was no longer able to attend church, he listened to the service on the radio. He will be remembered for his easy smile and laugh, outgoing and good-natured personality, determination, and dependability.

He was preceded in death by his wife, Jeanette; parents, Henry and Dena Schlutz; and a brother, Delbert Schlutz.

To send flowers to the family in memory of Marvin Rodel Schlutz, please visit our flower store.