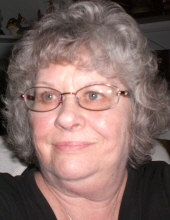 A celebration of life will be held at 10:30 a.m. on Wednesday, June 5, 2019, at Major Erickson Funeral Home, 111 N. Pennsylvania Ave. with Pastor Dan Larson officiating. A visitation will be held one hour prior to service time. Please wear casual clothes as Marlys always wore jeans.

Memorials may be directed to the family of Marlys O’Brien, or the Humane Society of North Iowa.

Marlys Jean (Pyle) O’Brien was born on October 13, 1945 in Mason City to Cleo and Gilma Pyle. She attended Mason City schools and was baptized and confirmed of the Lutheran faith. She married Keith Johnson on November 3, 1962. To this union, two children were born; Michael Keith Johnson and Cynthia Renee Johnson. She was later divorced. She was very proud of her children. She wanted her children to achieve more than she had and they did. Her son Mike became a Doctor and her daughter Cindi became a social worker. She was proud that both of her children achieved their degrees on their own. Her son Mike (Dawn) have three children, Erica, and twin boys Nathaniel and Brandon. Her daughter Cindi (Chad) have two boys, Zach and Kyler.

She met Raymond Myers on July 15, 2003. He was the love of her life. They made their home in Mason City, where they started from scratch on their home and made a wonderful home together which she adored and loved helping Ray achieve this.

She loved her and Ray’s family coming over to camp in the summer. Marlys and Ray loved the backyard for campers and many meals were served in the pinic shelter and campfires and stories. She loved dogs and they were always welcome at the campsite. Marlys hobbies included playing computer games, doing the daily puzzles in the Globe Gazette, and listening to the Statler Brothers.

Ray and Marlys did a lot of traveling together with their dogs. She saw places she had never been to before; Graceland House on the Rocks, the Badlands, Niagara Falls, Mississippi River, and the Colorado Mountains were some of her favorites.

Marlys worked as a nurse’s aide for Good Shepherd Health Center off and on from the age of 19 until retirement at the age of 64. She loved the elderly and especially the Alzheimer residents.

Marlys is preceded in death by her son, Mike Johnson; Raymond Myers; and her parents, Cleo and Gilma Pyle.

To send flowers to the family in memory of Marlys Jean O'Brien, please visit our flower store.