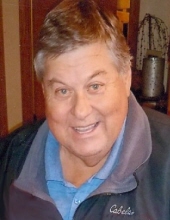 Mark Randall Flickinger, 65, of Mason City, IA, died Saturday, May 27, 2017, at Mayo Clinic St. Mary’s Hospital in Rochester, MN. Memorial services will be held at 2:00 PM on Thursday, June 1, 2017, at Major Erickson Funeral Home, 111 N. Pennsylvania Avenue – Mason City, with Pastor Ed Bard, Chaplain – Hospice of North Iowa officiating. There will be a gathering of family and friends one hour prior to the service. The family will also be at the Other Place (O.P.) in Clear Lake, IA for those that would like to reminisce on Thursday from 5:30 – 7:30 pm. Dress in casual. Per his wishes, his body was cremated. Inurnment will take place at the Fern Cliff Evangelic Cemetery in Wayland, IA at a later date. A celebration of life gathering will be held from 1:00 PM – 5:00 PM on Saturday, June 3, 2017, at the Flickinger family pond, 2635 Hwy 1 South, Washington, IA 52353. Dress is casual. There will also be a memorial stone placed in Mark’s honor at the family pond. Memorials may be directed to the Mark Flickinger Memorial Fund in care of the family.

Mark was born June 2, 1951, in Washington, IA, the first born to Milton R. and Carol F. (Meeker) Flickinger. He graduated from Washington High School in Washington, IA in 1969. In 1974, he graduated from the University of Iowa with degrees in Accounting and Finance. All who knew him were very aware that he was a die-hard Iowa Hawkeye supporter and fan. On January 11, 1975, Mark was united in marriage to Vicky Libe, and to this union three children were born: Jeremy, Adam and Heidi. The couple later divorced but remained friends. In 1979, he started his own C.P.A. practice in Mason City and sold it in 1983. The majority of the rest of his professional career was as C.F.O. at Mason City Business Systems for 30+ years. Mark enjoyed spending time with his family – especially his children and grandchildren. He had a great love for spending quality time with family and friends, golfing, camping at the pond, traveling and making friends wherever he went. Mark was unmatched in his love and compassion for family and friends.

To send flowers to the family in memory of Mark R. Flickinger, please visit our flower store.