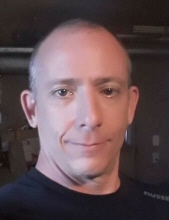 Mark “Muddy” Waters, 44, of Kensett, died July 27, 2018. Memorial services will be held at 2 PM Thursday, August 2, 2018 at the First Christian Church, 318 North Adams Ave with the Rev. David Wagner officiating. Visitation will be held Wednesday from 5 until 7 PM at the Major Erickson Funeral Home.

Mark was born January 28, 1974 the son of Junior G. and Lorie (Cummings) Waters in Mason City, Iowa. He later attended school at North Central and graduated in 1992. On June 10, 2000 he was united in marriage to Oretta McMullen at the First Christian Church, Mason City.

Mark was an avid fisherman who had many favorite spots on the local water ways. Worth County Lake was at the top of his list for his favorite hot spot. He enjoyed being outdoors and spending time in nature relaxing. His children made fun of his bicycle but he loved riding it with Carter. Mark loved to make others laugh. He enjoyed watching wrestling and Hawkeye football. He had a passion for building things as well as fixing them with duct tape. Besides spending time with his children, Mark looked forward to eating (especially his Mom’s cooking) and sleeping.

Those thankful for having shared in Mark’s life include his Mother, Lorie Waters; children, Trisha, Hannah, Cayla, Carter and their half brother Alex; ex-wife, Oretta Waters; sister, Angie Waters; brother, Dan (Michelle) Waters; two half sisters, one half brother, one niece, Kenzie and one nephew, Coleman.

Mark was preceded in death by his father and grandparents.

To send flowers to the family in memory of Mark N. Waters, please visit our flower store.