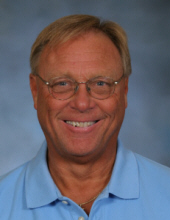 Mark Robert “Doc” Detra, 68, of Mason City, died Monday, May 15, 2017 at the Muse Norris Hospice Inpatient Unit. Visitation for Doc will be held from 3:00 to 7:00 PM Thursday, May 18, 2017 at Epiphany Parish Holy Family Catholic Church, 714 N. Adams. A memorial service for Doc will be held 5:00 PM Thursday, May 25, 2017 at the North Iowa Area Community College Auditorium, 500 College Drive with Pastor Kathy Graves officiating. Inurnment will take place in Elmwood St. Joseph Cemetery at a later date. Memorials may be directed to Hospice of North Iowa or the Mark “Doc” Detra Mason City High Memorial Scholarship.

Doc was born September 24, 1948 in Mason City the son of Robert and Denise (McGowan) Detra. He graduated from Mason City High School in 1967. Doc married Tammi McGraw in 1968, Julie Jost in 1977 and had a long term relationship with Diana Gomez. Through the years, Doc worked for the Rock Island Railroad, Builders Supply, Pabst Blue Ribbon and for the past 21 years at Mason City High School as a student liaison. Doc umpired for the Mason City Parks and Rec. for 40 years. Slow pitch softball was a big part of Doc’s life. He was inducted into the River City Hall of Fame in 1996. Just a few of his many other interests included, the Green Bay Packers, the Los Angeles Dodgers, was an avid Mohawk fan and WWE wrestling. Doc loved car racing especially Sprint Car Racing, attending the nationals in Knoxville since 1966 and he could be found every Sunday at the I-35 speedway. He also loved spending time with his grandchildren and had a soft spot for special needs kids.

To send flowers to the family in memory of Mark "Doc" Detra, please visit our flower store.