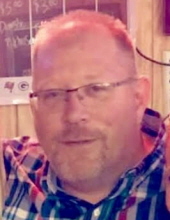 Memorials may be directed to the family of Mark Baker.

Mark was born on June 15th, 1968 in Marshalltown, IA. Mark is the son of John Ellis and Deborah D. (Creigh) Baker. In 1986, he graduated from West Marshall High School in State Center, IA. Over the years, he worked for Lennox Industries in Marshalltown, was an engineer at the IC&E Railroad in Mason City, and worked for Gencor Industries in Marquette. Mark enjoyed spending time with his family, especially his son, Wyatt Andrew Baker. Wyatt was the joy of Mark’s life and they cherished their time together, laughing and playing. Other hobbies included fishing, taking care of his dog, Ozzy, and cheering on the Pittsburgh Steelers. He loved wildlife, the changing of the seasons, and being outdoors. He was a member of the International Association of Machinists and Aerospace Workers, American Federation of Labor-Congress of Industrial Organizations (AFL-CIO) Local Number 2908.

He was preceded in death by his father, John Ellis Baker, and his grandparents.

To send flowers to the family in memory of Mark Andrew Baker, please visit our flower store.