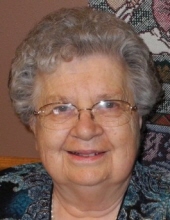 Marjorie Ava Jurgemeyer was born August 8, 1927 in rural Klemme, IA. The daughter of Leslie and May Hartbeck, she was one of four daughters. Marjorie was baptized as an infant and confirmed as a youth at the Klemme Reformed Church. At the time of her death she was a member of Bethlehem Lutheran Church in Mason City.

Marjorie attended the rural schools of Ell Township and Klemme High School. She furthered her education at Waldorf College where she received her teaching certificate. She taught at a one room schoolhouse in rural Klemme, Iowa. On May 18, 1948, she married Everett Jurgemeyer. Marjorie continued her education at Wartburg College. She taught at the Sheffield – Chapin Community School District for twenty-five years.

She was preceded in death by her husband, Everett Jurgemeyer, her parents, Leslie and May Hartbeck; and her sister Lucille Jurgemeyer

To send flowers to the family in memory of Marjorie Ava Jurgemeyer, please visit our flower store.