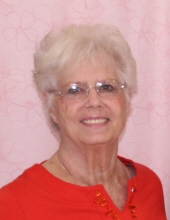 Marjorie A Ryan, 80, of Mason City, passed away peacefully at home, with her family by her side, and entered her heavenly home, on Thursday, March 5, 2020.

Per her wishes, she was cremated. Services have postponed. In lieu of flowers, please direct memorials to Continental Baptist Missions, 11650 Northland Dr NE, Rockford, MI 49341.

Marjorie was born on February 12, 1940, in Forest City, IA, the daughter of Lawrence and Amanda Adams. She married Wayne Ryan on August 30, 1958, at the Little Brown Church in Nashua, IA

She was a restaurant owner, cake decorator, seamstress and homemaker. She loved all kinds of crafts, especially embroidery and baking. She belonged to the Mason City Christian Women’s Connection, and was active on the decorating committee.

Marjorie accepted the Lord as her Savior, and was baptized in 1974, and became active in her church, serving on many committees, and teaching Sunday School.

She was preceded in death by her parents, one brother Ronald Adams, a son-in-law Carlos J Robles and a nephew.

To send flowers to the family in memory of Marjorie A. Ryan, please visit our flower store.