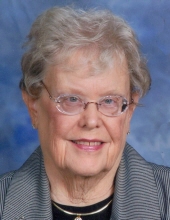 A celebration of life service will be held at 11:00 AM on Thursday, July 20, 2017 at Trinity Lutheran Church, 213 N. Pennsylvania Avenue, Mason City, IA with Rev. Dan Gerrietts officiating. There will be a gathering of family and friends from 4:00 – 7:00 PM on Wednesday, July 19, 2017 at Major Erickson Funeral Home, 111 North Pennsylvania Avenue. A private family interment will take place at Elmwood St. Joseph Cemetery. In lieu of flowers the family suggests memorials be directed to Trinity Lutheran Church.

Marilyn was a devoted wife, mother, grandma and great grandma. After raising four children, the family started Monroe Storage where Marilyn was the bookkeeper for many years.

Marilyn supported Jack in his work travels around the United States. They took numerous trips, traveling to every state in the United States, as well as several trips overseas and many cruises. Marilyn's favorite trips were the cruises she took with her entire family. Marilyn vacationed in Palm Springs, CA for over 20 years where Jack conducted annual business meetings. The last ten years Jack & Marilyn invited the entire family to join them in Palm Springs, where many great memories were made.

Marilyn was a life long member of Trinity Lutheran Church where she was baptized, confirmed and married. She was active in the North Iowa Vintage Auto Club (NIVA), her Wednesday morning coffee group, the Class of 1955, and she enjoyed playing Bingo at Homestead Assited Living. Marilyn also had a love for the music of Neil Diamond.

Marilyn's family would like to say a special thank you to: Trinity Lutheran Church, Homestead Assisted Living staff and residents. Also a big thank you to the many family and friends who visited her over the past year. It truly meant the world to her.

To send flowers to the family in memory of Marilyn V. Zook, please visit our flower store.