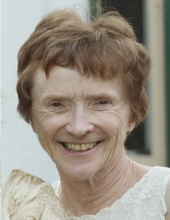 Marilyn L. (Adams) Lagios, 71, of Clear Lake, IA, passed away at Mercy Medical Center North Iowa on December 27, 2017. She was surrounded by her loving family and caring medical team. On Saturday, January 6, 2018 a graveside gathering for Marilyn will be held at 10:30 AM at Elmwood-St. Joseph Cemetery, followed by a celebration of life service at 11:30 AM at the Heritage Room at First Citizens Bank, 2601 4th St SW, Mason City, IA. Pastor Tom Martin of Elk Creek Lutheran Church will officiate.

Marilyn was an exceptional woman who lived life on her own terms. Nothing would stop her from embracing all that the world offered. She did this despite facing many challenges living with chronic illnesses, including juvenile diabetes and dystonia.

People probably best remember Marilyn for her sparkling personality that filled the room and her big, generous heart. She was extremely charismatic and enjoyed lively conversations with family, friends, and strangers. Her generosity had no limits. She tirelessly gave with her time, money, and her entire being.

.Marilyn was born on September 22, 1946 at Park Hospital, Mason City, IA, the 8th child of Frank Sr. and Henrietta Adams of Northwood, IA. She was baptized at Deer Creek Valley Lutheran Church. In more recent years, she became a member of Elk Creek Lutheran in rural Kensett, IA.

In 1964, Marilyn graduated from Northwood-Kensett High School with honors. She then received her B.A. degree in teaching from the University of Northern Iowa and taught at different educational levels. Always curious and ready to expand her professional development, she learned accounting, working for several firms including Iowa Hardware Mutual, where she met George Lagios, her husband of 48 years. They married in 1969 and shortly thereafter started a family.

Marilyn was a very busy wife and new mother. She worked part-time, played and coached softball, volunteered at the radio station, assisted with her mother’s farm, and became involved with her Lutheran church and her husband’s church, Transfiguration Greek Orthodox Church of Mason City. She regularly helped at the annual Greek Festival and within the Greek community she met many wonderful people with whom she fostered life-long, lasting friendships.

Throughout the years Marilyn enjoyed working and volunteering, eventually entering into politics and government. She became active with the Cerro Gordo Democratic Party and in the 1980s she took employment with Iowa Congressman Berkley Bedell. This inspired her relocation to Washington, D.C. She worked on Capitol Hill for a variety of congress members and Senator Barbara Mikulski. She loved the fast pace and cultural diversity of D.C. Marilyn eventually became a patent law secretary, filing patents with the U.S. Patent Office. After retiring in 2009, she resided in Clear Lake, IA with George and visited her daughter Melina in Friday Harbor, WA for extended stays.

During her life, Marilyn met many people from all walks of life. She especially connected with children. She taught Sunday school, babysat, christened godchildren, sent gifts, hosted outings with her great nieces at Stebens Children’s Theater and dressed up as the Gingerbread Lady for her daughter’s library storytime. A true people person, Marilyn thrived in social situations. She had a gift for connecting with people near and far, keeping in touch through phone calls, visits, writing letters, and by texting with her favorite cell phone always kept at her side.

Marilyn also had many loves and interests. She spent hours baking, socializing, reading, listening to audiobooks, traveling, attending programs at NIACC and the Clear Lake Public Library, studying the bible, vacationing at her sister’s lake house, organizing class reunions, writing entertaining skits and songs, and enjoying time in her beloved backyard garden that was filled with herbs, flowers, birds and butterflies.

What Marilyn loved most of all though, was her family. She called her sisters her “rock.” She was close to her mother, aunts and uncles, husband, siblings, in-laws, children, godchildren, nieces and nephews, great nieces and nephews, cousins, and her extended group of friends. She spoke of them often, gave to them generously and always put others before herself. Even near the moment of her passing, Marilyn thought of her family over her own needs, asking about their Christmas holidays and wanting to make sure they were okay. Marilyn took her husband George’s hand, gave it a loving squeeze in honor of their wedding anniversary, the same day she departed from this very precious thing we call life.

Marilyn was a one-of-a-kind, truly inspirational person. She had a special way of spreading her twinkling magic around to others. She will be missed forever by those who love her dearly.

To send flowers to the family in memory of Marilyn Louise Lagios, please visit our flower store.