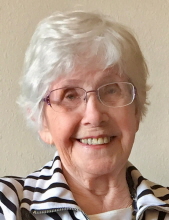 Marilyn Pfeifer, 90, of Osage and formerly of Mason City, passed away Monday, September 2, 2019 in Osage, IA.

Funeral services will be held at 11 AM Friday, September 6, 2019 at the First United Methodist Church, 119 South Georgia Ave, with Rev. Dan Fernandez officiating. Interment will follow in the Elmwood-St. Joseph Cemetery. Visitation will be held one hour prior to service time Friday at the church.

Marilyn was born on December 13, 1928 in Breckenridge, Minnesota to Corwin and Margaret Moffet. She grew up on a farm in Barney, North Dakota with her three younger brothers. She attended Valley City State Teacher’s College and taught elementary school in Fargo. She was married on November 10, 1951 to Eugene (Gene) Pfeifer in Mooreton, North Dakota. They lived in Fargo and Hankinson, North Dakota, before moving to Mason City in 1965. Marilyn taught remedial reading at Holy Family Elementary School and was a substitute teacher for the Mason City Community Schools. She also worked as a sales representative for the Scholastic Book Company.

Marilyn was active in the community as a volunteer for numerous organizations, including the Girl Scouts, the YWCA, the Cancer Center at Mercy Hospital, and the Stockman House. She was an active member of the First United Methodist Church for over 50 years.

She enjoyed Bible Study, playing Bridge, Book Club, and the Occident Study Club. Marilyn and Gene were aficionados of Big Band music and could often be found enjoying themselves dancing at the Surf Ballroom. Her life was defined by her love for and devotion to her family and friends.

Marilyn is survived by her husband, Gene, and children, Nancy (Joe) Garcia of Bethesda, Maryland, and Tom (Judy) Pfeifer of Osage. Also surviving are her brothers Kenneth (Sue) Moffet of Dallas, Texas, Duren (Sharon) Moffet of Kerrville, Texas, and Donald (Kairouan) Moffet of Barney, North Dakota. She is also survived by six grandchildren, five great grandchildren, and her beloved extended family and many friends whose lives she touched deeply.

Marilyn was preceded in death by her parents and granddaughter, Hannah Pfeifer.

In lieu of flowers, please direct memorials to the First United Methodist Church.

To send flowers to the family in memory of Marilyn J. Pfeifer, please visit our flower store.