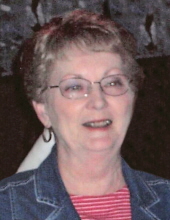 Marilyn (Marshall) Arnold 78, of Mason City, died Wednesday April 20, 2022, after a short-fought battle with cancer at Hospice of North Iowa. Per Marilyn’s request her body was cremated and has requested no services. Memorials may be directed to the Marilyn Arnold Memorial Fund.

Marilyn was born in Hancock County the daughter of Robert and Luella (Kennedy) Marshall. Marilyn graduated from Clear Lake High School. Marilyn Marshall was wed to Jim Arnold May 13, 1961, in Mason City. Marilyn was a homemaker to her four daughters, one with special needs that kept her on her toes. Once her children were older, she started selling Hoda, Retail at Robert’s then worked her final job at Diamond Vogel Paint. Where her customers would wait for her to be at work. Marilyn had a knack for decoration. Marilyn is survived by Tammy (Phil) Pardun of Mason City, Tracy (Danny) Shackleton of Mason City, Tina Arnold of Cedar Falls, Iowa, and Julie Black of Mason City, Seven grandchildren and nine great grandchildren. Sister Marlys, brother Mike, and special friend Linda Rasmusson.

Marilyn is preceded in death by her husband James, her parents, her brother Merle, her grandson Seth and nephews Chucky and Matt. In laws Boyd and Lucille Arnold and good friend Mearle Rasmusson who always brought his girls blonde brownies at Applebee’s.

To send flowers to the family in memory of Marilyn J. Arnold , please visit our flower store.