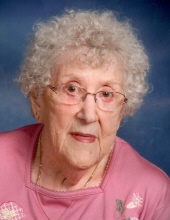 Marge was born September 1, 1929, in Mason City, the daughter of Thomas and Marguerite (Murray) Holmes. She graduated from Manly High School in 1947, and continued her education at Hamilton Business College. On December 22, 1951, she married George Pappas at Sacred Heart Catholic Church in Manly, IA. The couple enjoyed camping, spending time at their cabin in Minnesota and traveling – particularly to Alaska and Canada. Marge also enjoyed reading, Sudoku, fishing, taking care of their Boston Terriers, spending time outdoors and enjoying the wildlife. She was a member of Holy Family Catholic Church where she was involved in church circle and many other church activities.

To send flowers to the family in memory of Marguerite A. Pappas, please visit our flower store.