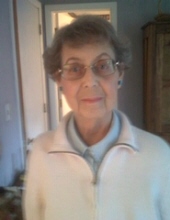 Margery A. Burgraff, 97, formerly of Mason City, passed away on Thursday, February 21, 2019 at The Gardens at the Episcopal Homes in Saint Paul, MN.

A gathering of friends and family will take place one hour prior to the graveside service at Major Erickson Funeral Home, 111 N Pennsylvania Ave.

Margery Athanasia Burgraff was born on October 30, 1921 in Mason City, Iowa to William and Madge Pappas. She received her education in the Mason City School System. Margery was a member of the Mason City High School band, playing the bassoon. Following high school, Margery moved to St. Paul, Minnesota where she worked for the Great Northern Railroad, Conwed Corporation and the Weyerhauser Corporation as Executive Secretary and Office Manager.

Margery married Glenn Ellsworth Burgraff, owner of the B & O Drugstore, in 1966 and moved back to Mason City. Margery enjoyed cooking, gardening, sewing, bridge and needlework. She was a member of the Mason City History Club and the Greek Orthodox Church’s Philoptochos Society and participated in many of their bake sale activities.

Margery is survived by her three children Jane Garras, Julie Miller and John Miller; her step son David Burgraff and his wife Debbie; her granddaughter Kyrie Garras Wong and her husband Tom and grandson Andrew Burgraff and his wife Alesha; and her nieces and nephews, Nancy Metcalf, Thona Pappas, Bill Pappas and Sharon Sweeney.

She was preceded in death by her husband Ellsworth in 2004; her parents William and Madge Pappas, her uncle and aunt, Frank and Hazel Kinsella and her brother and sister-in-law William and Kathryn Pappas.

To send flowers to the family in memory of Margery A. Burgraff, please visit our flower store.