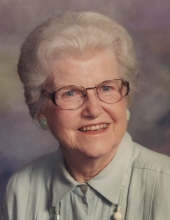 Inurnment will be in Elmwood-St. Joseph Cemetery.

Visitation will be one hour prior to service time on Monday.

The service will be livestreamed to Major Erickson's Facebook Page.

Margaret was born March 17, 1928 in Mason City, daughter of James and Genevieve (Baumstark) Downs, and baptized at St. Joseph Catholic Church, where she remained a lifelong member. During her high school years, Margaret worked at Northwestern Bell, and attended Hamilton Business College for one year before meeting George Lindahl. On May 9, 1950, she married George at St. Joseph Catholic Church in Mason City.

After their wedding, Margaret and George lived in Council Bluffs, Iowa for less than a year, moving back to Mason City, where they purchased a neighborhood grocery store. Lindahl Grocery was located at the point of the five-way intersection of East State, Maple Drive, and Kentucky, near East Park. Margaret and George raised three children, Mark, Kerry, and Anne, while operating Lindahl’s Grocery, which they closed in 1972. Margaret and George also raised George’s younger sister Patricia Lindahl Faber through her teenage years.

Margaret worked many hours at Lindahl’s Grocery, letting children behind the counter to choose the candy they wanted, operating the cash register, and checking out customers.
She also worked for St. Joseph Mercy Hospital, Holy Family Rectory, Kemp’s Foods, and Knights of Columbus Insurance.

Margaret was especially proud of her grandchildren, Joe Lindahl and Margo Winter. Despite COVID-19, Margaret was able to meet her only great grandchild, Miles Lindahl, son of Joe and Kelly (Patava) Lindahl.

Besides her parents, Margaret was preceded in death by her husband, George, along with all of her brothers and sisters. Survivors include her children, Mark (Becca) Lindahl of Des Moines, Kerry Lindahl of Mason City, and Anne (Randy) Winter of Wausau, Wisconsin, their families, and numerous nephews and nieces.

Margaret’s family wishes to express their heartfelt thanks to the medical staff at Mercy One Hospital, staff of Mercy One North Iowa Hospice, and the staff at Oakwood Care Center of Clear Lake for their loving care and compassion. In lieu of flowers, the family asks memorials to be sent to Oakwood Care Center.

To send flowers to the family in memory of Margaret M. Lindahl, please visit our flower store.