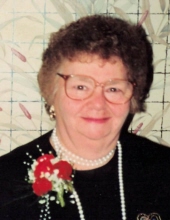 A funeral service will be held on Wednesday, March 23, 2022, at 10:30 a.m., at Trinity Lutheran Church, 213 North Pennsylvania, and masks will be required upon entering.

Visitation will be held an hour prior to the service time on Wednesday.

Services will be livestreamed on Major Erickson’s Facebook Page.

Memorials may be directed to Trinity Lutheran Church or the family of Margaret Quam.

Margaret was born September 28, 1932, in North Dakota to Oat and Hazel (Turner) Bailey. They moved to Mason City, Iowa where she attended Mason City schools graduating in the class of 1952.

On January 31, 1953, she married the love of her life, Lyle Quam. She gave birth to her first of six children while he was deployed in Korea. When he came home, they made their home in Mason City. Margaret was a busy homemaker. She was a baker of bread, pies, cookies and cakes; as a matter of fact, she made her own wedding cake. She also made mounds of donuts to her family’s delight. She canned vegetables for winter use and made jelly. She kept a flower garden and had flowers in her house all spring and summer. She was very hospitable and there was always coffee on in case anyone dropped by for a visit.

Margaret was also very crafty. The family was fond of the pinatas that she made for family Christmas parties. She made candles as well as fashioning decorations for various holidays. While her children were in school, she was active in the Parent Teacher Association and read to her children every night. She was a reader and wanted her children to read as well. She extended her baking to others and sent care packages to relatives in the military and made cakes for church when needed for functions.

The family did a lot of camping and a lot of it was in a school bus they converted into a camper. Margaret had a lovely singing voice that she lifted in worship at Trinity Lutheran Church. Margaret is survived by her husband of 69 years, Lyle; 6 children, Timothy (Barb) Quam, Nora Springs, IA, Bruce (Mona) Quam, Mason City, IA, Cheryl (Randy) Brenton, Clear Lake, IA; Martin (Lou Hoffman) Quam, Minneapolis, MN, Blake (Karla) Quam, Mason City, IA, and Sarah (Jamie) Zweydoff, Pembroke, KY; and 2 brothers, John Bailey of Clear Lake, and Spencer Weaver of Manly; 12 grandchildren and 13 great grandchildren.

To send flowers to the family in memory of Margaret E. Quam, please visit our flower store.