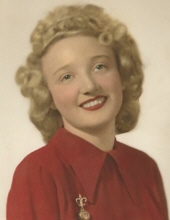 A funeral service will be held at 10 a.m. on Wednesday December 22, 2021, at Trinity Lutheran Church, 213 N Pennsylvania. Per church guidelines masks will be required.

Memorials may be directed to the family of Margaret Van Horn.

Margaret Anna Van Horn was born on October 22, 1932, in her family’s farmhouse near Miltenville, Iowa to parents Charles and Minnie (Doescher) Opkis. She was baptized as a young child and at the age of five she and her family moved to the Mason City area. She attended many country schools before going to Monroe and MCHS.

She loved the lord from an early age. She attended confirmation classes in the Palace Theater as Trinity’s “little” church had burned down. She was confirmed by Rev. Alvin Rogness. She met the “love of her life” Lloyd Van Horn and they were married by Rev. Rogness on February 18, 1950.

In 1951 the couple moved to Winnebago Heights where she and Lloyd started Van Horn Auto Parts. She worked in the office for many years as the secretary. In 1952 they were blessed with their first child Connie, followed by twin boys Terry and Larry in 1953, and Vicki in 1954. In 1984 they opened Van Horn Truck Museum, which was open for 18 years. She did most of the antique restoration.

Margaret and Lloyd did a lot of traveling and made many lifelong friends. She enjoyed doing crafts and word puzzles. She was a devoted wife, mother, grandmother, and great grandmother always putting everyone before herself.

To send flowers to the family in memory of Margaret A. Van Horn, please visit our flower store.