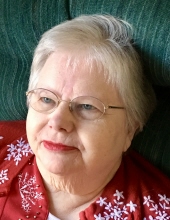 A graveside service will be held 10:00 A.M., Wednesday, September 30, 2020 at Memorial Park Cemetery with Rev. Kent Mechler officiating. The service will be livestreamed on the Major Erickson Funeral Home Facebook page.

Memorials may be given to Iowa Public Television and the Good Shepherd Telephone Reassurance Program in memory of Marcia.

Marcia Mae Abrams, the daughter of John and Amy (Benson) Rasmussen, was born March 19, 1935 near Clarion, Iowa. She was baptized at the Evangelical Lutheran Church in Eagle Grove and confirmed at First Lutheran Church in Clarion. Marcia graduated from Clarion High School in 1952 and continued her education at Hamilton Business College in Mason City where she met her husband, Lloyd. They were married on December 20, 1953. They lived in several towns in Iowa before moving to Mason City in September of 1959. Marcia was employed as an executive secretary for 20 years at Boatmen’s Bank, formerly United Home Bank, in Mason City retiring in 1997. In her retirement she worked part-time as office manager for the Mason City Community Theatre. She enjoyed reading, daily devotionals, cooking, word puzzles, entering contests, spending time with her family, and watching Wheel of Fortune.

She was a member of St. James Lutheran Church, St. James Altar Guild and the Good Shepherd Auxiliary serving as treasurer.

To send flowers to the family in memory of Marcia Mae Abrams, please visit our flower store.