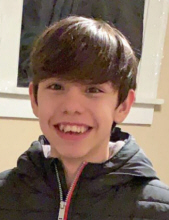 Manuel Nereo Quiroz, Jr., the son of Manuel, Sr. and Rochelle (Ketchum) Quiroz, was born January 19, 2005 in Mason City. He was baptized in Minneapolis, MN. Manny attended Mason City Schools where he currently was an eighth grader at John Adams Middle School. He enjoyed spending time in Fargo, ND with his father, Manny, Sr., visiting his grandma, Deb, on her farm near Klemme and playing video games with his friends. He loved and adored his mother, Rochelle. Manny had many hopes and dreams for his future and will be greatly missed by his family and friends.

He was preceded in death by his special great grandparents, George and Imogene Emmert; and a cousin, Colette Perry.

To send flowers to the family in memory of Manuel N. Quiroz, Jr., please visit our flower store.