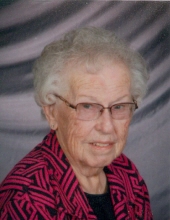 A. Lucille Feldhus, 93, of Mason City, died Sunday February 4, 2018 at the Mercy Medical Center-North Iowa. Funeral services will be held at 11:30 AM Friday February 9, 2018 at the St. James Lutheran Church, 1148 4th St. SW, with Pastor Dennis Niezwaag officiating. Interment will follow in the Elmwood-St. Joseph Cemetery. Visitation will be held Friday one hour prior to service time at the church.

Lucille was the oldest of four children born to Ora George and Anna Catherine (Schoborg) De Lawyer. She attended grade school at Immaculate Conception in Haverhill and while in 5th grade the family moved to rural Liscomb where she attended Liscomb Consolidated and graduated from high school. She was active in sports, on the basketball team, loved music and played cornet in the band, and was often asked to play Taps at funerals and Memorial Day observances in the area. She enjoyed spending free time crocheting and doing crafts. Lucille also enjoyed playing cards with her friends on Friday afternoons and going shopping.

At the young age of 12 she began employment as a “hired girl” for three different families that lasted through her school years, after which she was employed at F.W. Woolworth, Marshall Canning Co. (working with German prisoners of war), Tremont Grill as a cook and waitress in Marshalltown until moving to Mason City in 1945 where she was employed at F.W. Woolworth, J.J. Newberry, Lyons Cleaners and Buehler’s Café as a cook and waitress. This is where she met her husband George. They were married in 1948, after which she was employed in the office of Bankers Life Company, now Principal Financial Group, for 32 years, retiring in 1987.

In addition to her formal schooling, Lucille was awarded certificates on completion of nght secretarial classes at NIACC, a Dorothy Carnegie course and course 1 of principles of life insurance, all of which were beneficial in her attaining the position of Agency Administrator at Principal.

Lucille was a member of St. James Lutheran Church where she enjoyed being a scripture reader, volunteered at KCMR radio since its inception, was the treasurer of the Women’s Division of the Chamber of Commerce and Insurance Women of Cerro Gordo County. As a member of the Women’s Division she conducted bus tours of the city for convention visitors. She served 14 years as President of WA TAN YE on the local and national level and is currently Parliamentarian.

Lucille is survived by 8 nephews and 5 nieces, a special friend and caregiver, Carol Birkholz and special friends Don and Geri Barker.

She was preceded in death by her parents, husband George in 2002, sister, Hazel Hollingworth; brothers, Bernard and Marvin and niece Joy Myers.

To send flowers to the family in memory of Lucille Feldhus, please visit our flower store.