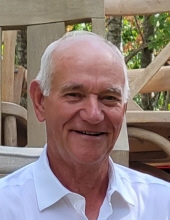 Memorial service will be held on Saturday, March 26, 2022 at Grace Evangelical Church, 440 N Illinois Ave., Mason City, IA. Service at 10:30 a.m. with a farm-style fellowship to follow. Visitation is Friday, March 25th, from 5 to 7 p.m. at Grace Evangelical Church. Burial will be in the Grafton Cemetery at 4:00 p.m. on Saturday, March 26th. Arrangements by Major Erickson Funeral Home, Mason City, IA.

Butch is the son of the late Lloyd and Wilma (Rosel) of Grafton. He graduated from St. Ansgar High School in 1967; graduated from NIACC; and immediately joined the National Guard. He received an honorable discharge in 1975. Since a small child, farming was his passion and he did it well! He stayed on the family farm until he retired. Butch married Judy (Bandel) Janka, Northwood, IA, on August 7, 1982, and she and her two sons joined him on the farm. Later the births of Jenae and Kelli completed the family of six.

Farm life first – but his hobby was tractor pulling and he did this for more than 50 years; always getting a little bigger and better. The decision to sell his pulling tractor, Dragon Iron, was a difficult one.

Butch and Judy moved to Osage, IA, in 2017, sold the acreage and Butch retired from farming in 2019. He did continue to farm as an employee of Cole Brothers., Grafton. In the off-season, he worked with Fox Auction Co. as needed.

Many tractor rides around Iowa were enjoyed by both Butch and Judy. Eventually Judy convinced him to purchase a Can-Am Spyder in the later years, an enjoyable change for both. Special memories include the trips to Alaska and New York with friends; and occasional trips to Florida and Arizona. They also looked forward to the annual vacations with their special friends in their ‘breakfast club.’ Butch was compassionate and friendly to everyone he met.

Those preceding him in death are his parents, Lloyd and Wilma Kronemann, his mother-in-law, Virginia Bandel, brother-in-law, Mark Postl, grandchild, Jade Janka and two step-grandchildren, Hailey and Sammy Riker and other extended family members.

To send flowers to the family in memory of Lowell "Butch" L. Kroneman, please visit our flower store.