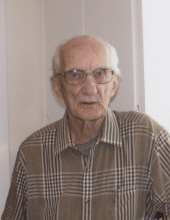 Louis F. Cota, 101, of Mason City, passed away peacefully on Monday, November 18, 2019, at the Heritage Care and Rehabilitation Center.

Interment will be held at Elmwood – St. Joseph Cemetery. Memorials may be directed to the family of Louis Cota.

Lou was born October 22, 1918, the 4th child of Frank and Mary (Huinker) Cota in the
family home where he resided all these years. He graduated from Mason City High
School in 1936. Lou went on to proudly serve his country during WWII with the
United States Navy from 1941-1949. He was stationed off the Coast of South America,
Pearl Harbor, The Ford Islands and Panama. Upon arriving home, he worked with his
father and brother Paul, as a projectionist at the Cecil (Park 70), Palace, Strand,
Drive-In and Cinema V Theaters in Mason City, retiring in 2004.

Lou was a treasured uncle, great uncle, great-great uncle, cousin and friend. He
told many stories of his tour with the Navy: crew, places and people he met
overseas. He enjoyed his McDonald’s Sunday morning breakfast buddies (including
the late Mario Ochoa) and any good conversation with anyone. He was always willing
to help when needed including at his cousin’s farm in Wisconsin and always had a
good time. His kind and gentle heart touched many.

His mother taught him a very strong faith in the Catholic Church where he was a
devoted lifetime member of St Joseph Church.

His hobbies were his cars (remembering every detail and date of purchase), guns and
hunting. He went on many hunting trips with his cousins in Wisconsin every fall for
many years and celebrating his birthday. He also took many trips to Dubuque, even
driving at the age of 92 to see his cousin Edna and her family and always
celebrating many October birthdays.

The family of Louis F Cota would like to thank the Rev. Neil Manternach for his
spiritual care given to Lou, Drs. Patrick Dunlay and Edward Heinrich for their
wonderful care, Hospice for making him comfortable. More importantly, the Staff and
Management at Heritage Care for their beautiful loving care while making Lou feel at
home and like family. All his cousins, friends and wonderful neighbors who visited
him at home and at Heritage and who always kept a watchful eye out for him. Thank
You!

To send flowers to the family in memory of Louis Francis Cota, please visit our flower store.