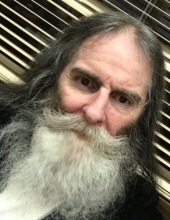 A celebration of life is being arranged for early spring to give him exactly what he deserves to remember and celebrate his life that was spent here with us.

Those wanting to extend a memorial or expression of sympathy, may direct them to the Al Collins Memorial at Major Erickson Funeral Home, 111 N Pennsylvania, Mason City, IA 50401.

Thoughts, condolences and stories may be emailed to his daughters at alcollinsmemory@gmail.com.

Louis, better known as Big Al or Al to many, was born on November 6, 1955 in Mason City, IA to BillaJean May and Larry Dean Collins Sr. Al was the second born of 5 siblings. Al attended Mason City High School and at the age of 17 enlisted in the United States Army, during that time he obtained his GED. After 3 years of service, Al was honorably discharged. After being discharged he went on to work as a roofer for many years.

When Al wasn’t sitting at home, you could easily find him out on a leisurely ride on his Harley, or heading to the casino for some gambling (in which he always had the best luck). Many of you may remember Al for his Pool skills! Everyone wanted him on their league and was able to shoot a fierce game any time of day. He loved attending any motorcycle rides that were arranged and would usually attend any event that he was invited to, even if it meant sitting back and just observing.

Al was the best of friends. He was always willing to help anyone, with no expectations of anything in return. He was always willing to lend a helping hand for anyone any time. He loved the time he got to spend with his children and grandchildren and boy did they light up when they got to spend time with him. His true joy came from the accomplishments of his children and grandchildren. Any chance he got to talk of them, he took advantage. He was so incredibly proud of them and loved them more than anything!

He is also survived by his sister, Teresa Collins (Kevin) and Brother, Larry Collins. Along with many nieces, nephews and an extended amount of family and friends.

Al was preceded in death by his Mom, BillaJean; Dad, Larry Dean Sr; brothers, Terry Austin and William “Jimmy” Collins; grandson, Shad and twin nieces Amelia and Sabrina Collins.
Al will truly be missed so much.

His daughters would like to send out a huge thank you to everyone who has reached out and sent condolences and positive thoughts. They mean the world to us.

Fly high and forever Ride Free Dad! We love you and will forever miss you! Until we meet again.

To send flowers to the family in memory of Louis Allan Collins, please visit our flower store.