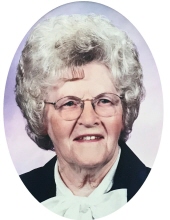 Lorretta was born December 4, 1919 to Edward and Louise Lines in Rockford, IA. Lorretta was baptized, confirmed, taught Sunday School for many years, and was a life-long member of Zion Lutheran Church. She graduated from Rockford Senior High, Rockford, Iowa in 1936. Lorretta met her future husband, Kenneth, in high school when they were seated together alphabetically.

Lorretta married Kenneth Duane Kreider on March 25, 1939 in Trenton, Missouri. Together they farmed west of Rockford until Kenneth passed away in 1982. Lorretta continued to live on and manage the family farm until her move to the Rockwell Nursing Home in December, 2015. Their union was blessed with a son, Dennis, and a daughter, Kendra.

Lorretta and Kenneth enjoyed traveling, visiting Hawaii, Jamaica, Las Vegas, their yearly fishing trips to Minnesota, and winter vacations to Brownsville, Texas. After Kenneth’s passing, Lorretta continued her travels with friend Juanita Schubert, going on an Alaskan cruise and numerous bus trips. Lorretta also enjoyed crossword puzzles, the daily cryptoquotes, playing Tri-Ominos, and quilting. In later years, she mastered the computer where she enjoyed playing Solitaire and Scrabble. Lorretta also spent much of her time reading, especially her Bible and daily devotions. Lorretta will be remembered for baking delicious pies with the thinnest, flakiest crusts which were always requested at every family function.

The family would like to express special heartfelt thanks to Roger Demaray for taking Mom’s mail into her while she was still at the farm and feeding the cat when we were all gone; Bob Schissel for joining Mom in wild games of Tri-Ominos and many visits with her, both on the farm and at the nursing home; Vickie Wagner for the many thoughtful little gifts and visits with Mom at the nursing home, especially on Mom’s final day with us. To Mom’s long-time in-home caregiver, Darcy Chase, special thanks for the personal care and companionship you provided Mom prior to her move to the nursing home.

Also our sincere gratitude to all the staff at the Rockwell Nursing Homes for their friendship and compassionate care of Mom during the last two years.

To send flowers to the family in memory of Lorretta Lucille Kreider, please visit our flower store.