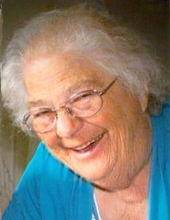 Lorraine E. Dirksen, 86, of rural Plymouth, IA, died Sunday, September 3, 2017, at her home. Funeral services will be held at 10:30 A.M. on Saturday, September 9, 2017, at the Prince of Peace Lutheran Church, 670 12th Street NE – Mason City, with Rev. Robert Harting officiating. Interment will take place at Memorial Park Cemetery. Visitation will be from 5:00 PM - 7:00 PM on Friday, September 8, 2017, at Major Erickson Funeral Home, 111 N. Pennsylvania Avenue – Mason City, and continue one hour prior to the church service. Memorials may be directed to the Lutheran Women’s Missionary Society.

Lorraine Esther Martin was born August 30, 1931, at home on the family farm just south of Winside, NE, the daughter of Alfried Hermann Gotthold “Alfred Fred” and Clara Katherine (Reeg) Martin. The family moved to their farm west of Plymouth in 1937. Lorraine attended school in Plymouth, graduating from high school in 1949.

On April 13, 1952 (Easter Sunday), she married Walter Roy Dirksen at Bethlehem Lutheran Church in Mason City. For most of their married life they lived in Mason City, moving to the farm near Plymouth in 2001.

Lorraine was a charter member of Gethsemane (now Prince of Peace) Lutheran Church, serving as a Sunday School teacher for many years. She was also active in the Mary-Martha Guild and in the Lutheran Women’s Missionary Society.

To send flowers to the family in memory of Lorraine E. Dirksen, please visit our flower store.