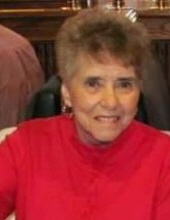 A memorial service will be held at 10:30 a.m. on Saturday, February 27, 2021, at Major Erickson Funeral Home, 111 N Pennsylvania Ave. Masks are required and social distancing guidelines will be encouraged.

The family will be following the memorial with a celebration of life at a later date.

In lieu of flowers, memorials may be directed to the Johnson Family.

Loretta “Dolly” Johnson, the daughter of Emily and Walter Block, was born February 20, 1933 in Britt, Iowa. Dolly married Hadley Johnson and to this union had four children. Dolly was an amazing grandmother to eight grandchildren, many great grandchildren, and one great great grandchild. Dolly was a lively woman who enjoyed dancing, music, bowling, gardening, and spending time with her friends and family. Dolly worked at Sheraton, Travel Inn, and many years at MercyOne North Iowa, from which she retired.
Dolly enjoyed spending time with “the girls” on several bowling leagues, one of which was called the Thursday Night Swingers. Dolly was a big Elvis fan and carried a picture of him everywhere she went in her purse. She also loved gardening and took great pride in sharing the beauty with her grandchildren. Dolly also cared deeply for animals. She spoiled her dogs, as well as all the “family” pets. Dolly was a giving woman leaving a mark within the hearts of many.

Dolly was preceded in death by her parents Emily and Walter Block, her husband Hadley Vern Johnson, her son Vern “Butch” Johnson, and her great grandchild Devlin Obregon .

To send flowers to the family in memory of Loretta "Dolly" Johnson, please visit our flower store.