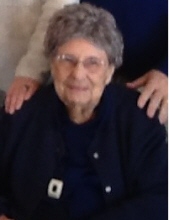 Funeral services will be held 10:30 A.M., Friday, November 30th at First Presbyterian Church in Mason City with Rev. Paul Collier officiating. Burial will be at Hartington Cemetery in Hartington, Nebraska.

Visitation will be held one hour prior to services at the church on Friday.

Lois Marie Grace Morten was born February 18, 1915 to George and Nell (Wisdom) Morten, at Hartington, Nebraska. She was baptized at Spring Valley Methodist Church, Cedar County, Nebraska. She graduated from the eighth grade at the Spring Valley School Dist. 32 in Cedar County and from Hartington High School, Hartington, Nebraska in 1931. Upon graduation from high schoo,l she moved to Sioux City, Iowa where she attended Comptometer School. Lois worked for Armour and Company for four years, Central Electric and Telephone Company for four years and Continental Baking Company for five years. She joined the First Presbyterian Church in November of 1942, in Sioux City, Iowa. She married Paul McIntyre on November 17, 1942 at First Presbyterian Church parsonage, Sioux City, Iowa, by Rev. Theo Lilley, Pastor. In 1951, her husband was transferred to Mason City.

After moving to Mason City, she joined First Presbyterian Church April 3, 1955, where she taught 7, 8, & 9th grade Sunday School Classes for three years. Lois was an active board member for three years; Deacon for three years; Membership and Outreach Committee for three years; Mission Committee for three years; President of the Women’s Association, serving two terms as Chairman of the Women’s Circles six times. She was also a member of the steering committee to make something positive after the death of Martin Luther King, Jr. Lois made arrangements with several Mason City churches to donate remaining rummage sales items to two Multi-Purpose Centers. She helped establish the ‘FISH’ organization, in the late 1960’s, spearheaded by the St. John’s Episcopal Church, serving on the Board of Directors as Volunteer Coordinator and President for two years. She was also instrumental in starting the CHARLIE BROWN DAILY CARE CENTER, in July 1968, serving as a Board Member, opening its doors in the First Christian Church.

In community service organizations, Lois helped organize the Hawkeye Harvest Hawkeye Food Bank, serving as a member of the board of directors for seven years, volunteering in its daily operations for more than two years. She has also volunteered her services at the INFORMATION CENTER of the NORTH IOWA MEDICAL CENTER for six years. She served on the hospital’s Auxiliary Board as Corresponding Secretary and Treasurer. She has served at HANDICAP VILLAGE, Clear Lake, Iowa for four years.

She organized the MAYOR’S COMMISION ON YOUTH and chaired it for three years. She volunteered at MacNIDER MUSEUM. She was a member of TTT Society, Questers, 20th Century Club and China Painters Club, being a State Board member for three years.

In 1988 she received the Barbershop Harmony of Living Award for her community service.

As an active political leader for the Republican Party, she volunteered to organize and sponsor teenage Republicans for two years. Lois is a 20-year member of the MASON CITY MULTI-PURPOSE CENTERS’ ADVISORY COUNCIL and BOARD OF DIRECTORS and was an active participant in fund-raising for the North and South Centers sponsored by the North Iowa Community Action. At times instructed elderly women how to knit, knitting mittens, scarves and baby caps, many times purchasing the supplies herself!

For her political activities, Lois received a letter of personal thanks from President George Bush, which she promptly framed!

Lois has had a long-time challenging association with the Masonic committees and willingly shares her artistic talents for use in raising funds of countless projects such as raising multiple hundreds of dollars for the Shriners’ Crippled Children’s Hospital in Minneapolis, Minnesota.

In Lois’s Girl Scout Activities, she has been a leader in the Grant School District for seventeen years and was District Chairman in the Mason City area. Serving two years as Neighborhood Chairman, Member of the Nominating, Training and Program Committees/ as a member of the Camp Committee for ten years, was Camp Chairman two times and served as Treasurer. She has been a ‘Tri-T’ Chapter Treasurer, chairing fundraising campaigns.

In 1998 Lois was on the Grants and Campership Committee and helped the Community relations Task Group Festival Marching Unit – receiving the Mayor’s Award.

Lois was a recipient of the ‘THANKS BADGE’ – the highest award in Girl Scouting for voluntary assistance.

Until the very end she continued to knit prayer shawls and baby caps.

Lois was preceded in death by her parents, Paul Alexander McIntyre, her husband for 61 1/2 years, who died June 23, 1994, and five brothers and one sister.

Lois is survived by numerous nieces and nephews.

To send flowers to the family in memory of Lois M. McIntyre, please visit our flower store.