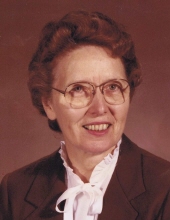 Lois M. Ellett, 98, of Solon, IA, died Wednesday, July 26, 2017, at the Solon Care Center in Solon. Funeral services will be held at 11:00 AM on Saturday, August 5, 2017, at Major Erickson Funeral Home, 111 N. Pennsylvania Avenue – Mason City, with Rev. Kathleen R. Moore of the First United Methodist Church officiating. Visitation will be held one hour prior to the service. Interment will take place in Elmwood-St. Joseph Cemetery in Mason City. Memorials may be directed to the Lois Ellett memorial fund in care of the family.

The oldest sister and the 3rd of the five children of John and Elizabeth (Wepking) Hill, Lois was born on December 24th, 1918. The Hills lived on the family farm north of Mason City which was established by their father around 1910. Lois attended country school just up the road from the farm and graduated from Mason City High School in 1936. She worked for the Standard Oil company in Mason City as a secretary and in a local department store in a variety of jobs and ultimately as a fashion buyer. Lois met Harry Ellett Jr after the war and they were married August 3rd, 1947 on what she always described as the hottest day of the year. The couple moved to Cedar Falls while Harry earned his teaching degree at Iowa State Teacher’s College and then to Sanborn, Iowa where he was a high school teacher and eventually the high school principal, and Lois was a home-maker. Lois was an active member of the community, working for many good causes and charitable organizations. She was a member of the United Methodist Church and served as the church secretary for a number of years. She was a long time, active member of the Eastern Star. After Harry’s death in 1974, Lois went back to work as a grade school secretary in Spencer, Iowa until her retirement in 1986. She filled her retirement with more good works and spent as much time a possible with her family, traveling to Iowa City to visit her grandchildren and Tucson to visit bother Gordon. There were many day trips to Algona, Iowa with brother Chuck to meet brother Byron and sister Francis “half way” for dinner and a visit. She continued to live in Sanborn until late 2014, then in the Solon Iowa Retirement Village and Care Center until her passing on July 26.

Lois is survived by her son Bob (Kate Wegman), her three grandchildren, Brian (Melissa Dohrer), Michael and Jacob, and three great grandchildren, Nick, Sophia and Mason.
She was preceded in death by her parents, her husband Harry and her siblings, Charles Hill, Gordon Hill, Frances Nutton and Byron Hill.

Lois was a warm hearted, compassionate person that was liked and respected by everyone she knew. Her good nature and unfailingly positive attitude was admired as an ideal to be strived for by her friends and family. She will be dearly missed by her many friends and family.

To send flowers to the family in memory of Lois M. Ellett, please visit our flower store.