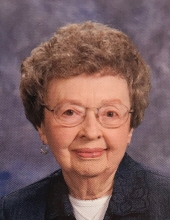 She was born to William Olson and Amanda Anfinsen in Lake Mills, Iowa. She was one of five siblings. Alan, Ruth, and Wilma predeceased her; Phillip survives her and lives in Forest City, Iowa. She would wish to be remembered as a loving and devoted mother of Douglas, Richard and Steven and wife of Robert who passed away in 1988. She was a devoted Lutheran and constant student of the Bible. Her spiritual life was nurtured and sustained by the pastors and congregation of Trinity Lutheran Church. She loved to lead the family down the center aisle of the church and be seated in one of the first pews.

In her early years Lois was a teacher in a one room school in Southern Minnesota. She met Robert in 1942 and they were married in September of 1943. They loved to dance at the Surf Ballroom in Clear Lake. Robert joined the Army Airforce in 1943 and served as a flight instructor. Douglas was born at Fitzsimons Army Hospital in Denver in 1945. After the military years they opened Bob's Café in Forest City, Iowa and later Richard and Steven were born in Forest City. They built one of their first homes in Forest City. Robert applied to be a flight controller in the very early years of the Civil Aeronautics Administration, later to become the Federal Aviation Agency. The family moved to Indianapolis, Indiana for one year and then moved to Mason City where Robert was employed at the flight service station and tower. Lois was "mom" and also a lay reader for the English Department at North Iowa Area Community College.

Lois enjoyed the friendship of Wilbur Stone for many years after Robert passed away and the entire family is grateful for those years. Because of memory and mobility issues Lois moved to the Cornerstone in July of 2013. She lived under the dedicated and loving care of the staff and physicians of Good Shepherd until her death.

Lois is preceded in death by her husband Robert and her oldest son Douglas.

She is survived by Richard (Jacqueline), Steven (Marcia), and Terumi (Douglas) Fogerty as well as five grandchildren: Gen (Jackie), Naomi, Bretta, Lauren, and Kelly (Brian). There are also two great grandchildren Max and Madi and one to be born in May 2020.

To send flowers to the family in memory of Lois C. Fogerty, please visit our flower store.