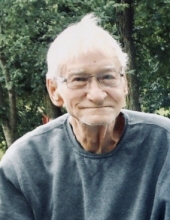 Inurnment will be at Deer Creek Lutheran Cemetery at a later date.

Visitation will be held one hour prior to service time on Thursday.

In lieu of flowers memorials may be directed to the First United Methodist Church, 119 South Georgia or the family of Lloyd Tinkey.

Lloyd L. Tinkey was born on November 25, 1933, in Dooley, Montana to parents H. Ray and Rose (Laverdure) Tinkey. Lloyd attended High School in Cedar Falls. Lloyd joined the United States Navy in 1953 serving during the Korean Conflict. On April 12, 1958 he was united in marriage to Carol Perkins in the Deer Creek Lutheran Church, Carpenter, Iowa.

Lloyd was a ”Jack-of-all-trades”, master of all. If it was broke, he could fix it. He loved to keep his hands busy, whether it was building models or larger items. His “pride and joy” was restoring their National Register Home in Yankton, South Dakota, making it a showplace, and one everyone in town wanted to see. He enjoyed tinkering with cars and restoring his 1932 Graham car. He also enjoyed going to work as a Hydro-Electric Plant Operator on the Missouri River. In retirement he spent many hours volunteering at church repairing, painting or whatever else needed doing. He and Carol loved to travel, visiting many historic sites and stopping along the way to antique hunt and maybe have a chance to add to one of his collections. He served as Church President in Montana, and Church Trustee in Yankton and Mason City.

He was preceded in death by his parents; daughter: Ann Hanson; siblings: L. Leo Tinkey, Roselle Sellner and Violet Jeys.

To send flowers to the family in memory of Lloyd Lawrence Tinkey, please visit our flower store.