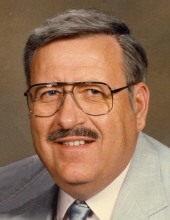 Lloyd John Boone, 84, of Mason City, IA, died Sunday, January 28, 2018, at the Muse Norris Hospice Inpatient Unit. Funeral services will be held at 11:00 AM on Friday, February 2, 2018, at St. James Lutheran Church, 1148 4th Street SE, with Pastor Dennis Niezwaag officiating. Military honors will be conducted by the Mason City Veterans Association. Visitation will be held one hour prior to the service. Interment will take place in Elmwood-St. Joseph Cemetery. Memorials may be directed to the family of Lloyd Boone.

Lloyd was born July 28, 1933, in Marble Rock, IA, the son of Roy L. and Frances J. (Avery) Boone. He grew up on a farm between Mason City and Rockwell, IA. He rode his horse to country school and graduated from Rockwell High School in 1951. Lloyd was drafted into the U.S. Army on April 1, 1953. He married Joanne Marie Keenan on August 18, 1953, at St. John Lutheran Church in Rockwell. While stationed in Italy, he had the opportunity to travel to Austria, Germany, Switzerland and France, and also met the Pope and Sophia Loren. He was honorably discharged in 1955.

Lloyd and Joanne made their home on Maple Drive in January of 1956, and throughout their marriage. Lloyd worked at Crescent Electric until joining the Mason City Police Department in 1964. He retired from the police department in 1990. He also loved coaching his Babe Ruth baseball team for 15 years. After retirement, Jo and Lloyd traveled the US in their Minnie Winnie RV and spent many winters in Texas. He enjoyed socializing, bowling, the Iowa Hawkeyes and piddling in the yard. He was a member of St. James Lutheran Church and the VFW.

He was preceded in death by his wife in 2017; his parents; parents-in-law: John and Edna Keenan; brother-in-law: Thomas E. Keenan and niece: Kimberly A. McLaughlin.

The family would like to thank all the staff at Cornerstone, Good Shepherd, and Country Meadow Place for the excellent care they gave Lloyd the last couple of years.

To send flowers to the family in memory of Lloyd J. Boone, please visit our flower store.