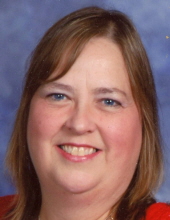 Visitation will be held from 5 to 7 P.M., Monday, February 25th at Major Erickson Funeral Home, 111 N. Pennsylvania Ave., in Mason City and will resume one hour prior to services at the church.

Memorials may be directed to the Humane Society of North Iowa or MercyOne North Iowa Hospice.

Linda C. Clarke, the daughter of Lyle and Clara (Holmen) Bartell, was born August 2, 1958 in Mason City. She graduated from Mason City High School in 1976. On June 3, 1977, she was married to Daniel L. Clarke at Trinity Lutheran Church in Mason City. They lived in Mason City all of their married life. Linda worked as a secretary at Curtis 1000 in Mason City, Mason City Business Systems, now Marco, and for the past four years at Complete Auto Repair. She enjoyed her cats and dog, driving around in her Mustang convertible, shopping and going to movies.

She was a member of Trinity Lutheran Church in Mason City.

She was preceded in death by her parents; sister, Laurie Bartell; and mother-in-law, Betty Clarke.

To send flowers to the family in memory of Linda C. Clarke, please visit our flower store.