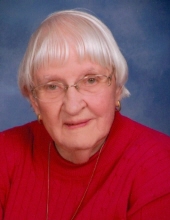 Burial will be at Park Cemetery in Nora Springs, Iowa.

Visitation will be held from 5 to 7 P.M., Wednesday October 3, 2018, at Wesley United Methodist Church, 1405 S. Pennsylvania Ave., in Mason City and will resume one hour prior to services at the church.

Lila “Midge” Jane Austin the daughter of Fred and Rose (Hamilton) Austin, was born October 28, 1933 in Brainerd, Minnesota. She moved with her parents to Nora Springs, Iowa where she attended and graduated from high school in 1951. Lila was employed at Henry’s Drive Inn, Gold Bond Trading Stamps, J.C. Penney’s, Kresge’s Store and Kmart until her retirement. In September of 1953, she was married to Donald Freese at the Little Brown Church in Nashua, Iowa. Two children were born to this union, Kevin and Debra. Lila volunteered at Mercy Medical Center for 32 years. She enjoyed her family very much.
She was a longtime member of Wesley United Methodist Church in Mason City, Iowa.

She was preceded in death by her parents; two brothers in infancy; brothers, Jim and Glen Austin; sister, Virginia Gerdes; and several brothers-in-law and sisters-in-law.

To send flowers to the family in memory of Lila Jane Freese, please visit our flower store.