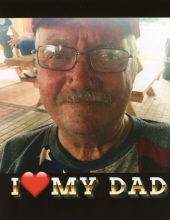 Visitation will be held Saturday, March 23, 2019 from 4 until 6 pm at the Major Erickson Funeral Home, 111 N. Pennsylvania Ave., Mason City.

Lewis passed away Monday surrounded by his family. Lewis was born July 20, 1944 the son of George and Rose (Foley) Strachota. He graduated from Tama Community School and went on to serve his country in the United States Army from 1963 – 1969 during the Vietnam war as a gopher. After his return home Lewis was united in married Emily Angle to this union a set of twins was born, they later divorced. Lewis later married Carol Elliot, the couple adopted a little girl and also had a son, they later divorced. At the time of their divorce Carol was pregnant with another set of twins. Years later he met Donna McDonald, and to this union three children were born. Lewis worked at the Tama Packing Plant, Pat Manning and Rollie Johnson Car Dealerships and did construction work.

To send flowers to the family in memory of Lewis Strachota, please visit our flower store.