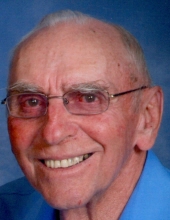 Leslie H. Deardeuff, 81, of Mason City, IA, died Sunday, December 24, 2017, at the Muse Norris Hospice Inpatient Unit with his family at his side. Funeral services will be held at 11 AM Thursday, December 28, 2017 at Trinity Lutheran Church with the Rev. Dan Gerrietts officiating. Interment will follow in the Memorial Park Cemetery, Mason City. Visitation will be held Wednesday, December 27, 2017 from 4 until 7 PM at the Major Erickson Funeral Home, 111 North Pennsylvania Ave.

Les was born January 31, 1936 in rural Rockwell, IA to John and Ada (Butcher) Deardeuff. He was the youngest of six children. He attended and graduated from the Rockwell School District. On June 15, 1956 Les was united in marriage to Jo Halverson. To this union five children were born, Connie, Mike, Janet, Julie and Amy.

Les and Jo have lived and farmed in rural Rockwell all their lives until they recently moved to Mason City. Les enjoyed being active with the Lion’s Club, Pork and Beef Producers, ushering at Trinity Lutheran Church and fishing with friends. Les loved spending time with his wife, family and friends. He spent countless hours watching his kids and grandkids compete in numerous sporting events and was named “Fan of the Year” in 2013 at the State Basketball Tournament. Les was known for his contagious smile and willingness to help others.

Les was preceded in death by his parents, John and Ada, sisters, Irma Throne, Doris Janssen, Marge Evans and a brother Don Deardeuff.

To send flowers to the family in memory of Leslie H. Deardeuff, please visit our flower store.