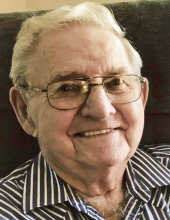 Funeral services will be held 10:30 A.M., Monday, July 22, 2019 at First Reformed Church in Meservey with Rev. Rodney Meester officiating. Burial will be at the Meservey Cemetery.

Visitation will be held from 3 to 5 P.M., Sunday at Major Erickson Funeral Home and Crematory, 111 N. Pennsylvania Ave., Mason City and will resume one hour prior to services at the church.

Memorials may be directed to First Reformed Church or MercyOne Hospice of North Iowa.

Leslie Edwin Pals, the son of Hilko and Tillie (Blau) Pals, was born July 7, 1929 on a farm in Wisnor Township, Franklin County. He attended Wisnor Township No. 4 country school near Meservey until the eighth grade. On November 21, 1948 he married Norma Morris at Salem Methodist Church in Meservey. They farmed in the Meservey area for 35 years before moving to Mason City in 1993. Leslie also did carpentry work around Mason City for 15 years. After Norma passed away, he continued to live in Mason City. On May 3, 1997 he married Maureen Everhart. Leslie enjoyed his family and traveling.

He was a member of First Reformed Church in Meservey.

To send flowers to the family in memory of Leslie E. Pals, please visit our flower store.