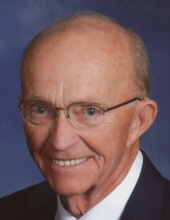 LeRoy E. Butler, 79, passed away Wednesday, March 18, 2020 at MercyOne North Iowa Hospice Inpatient Unit, Mason City. He spent his last days surrounded by his loving family.
Private graveside services will be held at Elmwood-St. Joseph cemetery with a celebration of life to be held on a date to be announced.

Lee was born on May 30, 1940 at home in rural Worth County, to the parents Lloyd M. and Alice (Johnson) Butler. After graduating from Mason City High School in 1958, Lee attended the University of Iowa, graduating in 1963. Following graduation he enlisted in the US Army and was stationed in Ft. Benning at Officers Candidate School. He served his country in the Vietnam War and was honorably discharged as a 1st Lieutenant.

On December 28, 1964, Lee married his high school sweetheart, Judy Girton. After Lee’s military service they moved to Ames, Iowa where he was a Director at the DOT. They were blessed with two children, son, Michael and daughter, Julie.

In 1976, Lee relocated his family to Mason City, Iowa where he purchased Standard Oil Jobership which became Butler & Curtis Oil. Lee retired after selling the business in 2008.
Lee served his community in many ways. He was a member of Kiwanis and was on the hockey board and Mason City Chamber of Commerce. He also served as an elder at the Presbyterian Church.

Lee and Judy cherished 18 years in Arizona, playing numerous golf courses which was one of Lee’s passions.

Lee was a loving husband, dedicated father and grandfather. He cherished the moments spent with his grandchildren whether it be at sporting events or time spent at the lake.

He was preceded in death by his parents, Lloyd and Alice; and his father-in-law and mother-in-law, Harlan and Katherine Girton.

To send flowers to the family in memory of LeRoy E. Butler, please visit our flower store.