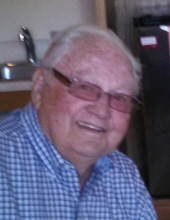 Leon W. Suby, 88, of Mason City, died Tuesday, August 29, 2017 at Mercy Medical Center North Iowa. Memorial services will be held 1:30 PM Saturday, September 2, 2017 at Trinity Lutheran Church, 213 N. Pennsylvania Avenue with Rev. Dan Gerrietts officiating. Following the service, the Suby family will greet friends in the fellowship hall, refreshments will be served. Per Leon’s request, his body will be cremated. Inurnment will take place at a later date in Elmwood St. Joseph Cemetery. In lieu of flowers, memorials may be directed to the Leon Suby Memorial Fund or donor’s choice.

Leon was born October 14, 1928 in rural Fertile, Iowa the son of Henry and Iva (Kirk) Suby. He attended country school near Fertile and finished his education in Fertile. Leon married Shirley Bartusek January 1, 1948 at the Little Brown Church in Nashua. Leon worked as a heavy equipment operator at the lime quarry in Fertile. In 1954, he started working at Interstate Power Company in their Gas Department. After 32 years of service, he retired. Leon was a long-time member of Trinity Lutheran Church, becoming a member in 1956. A few of his interests included spending time outside on the deck, putting together puzzles, fixing things in his workshop, travelling and spending time in Mesa, Arizona during the winter.

Leon was preceded in death by his parents, 3 brothers, Robert, Roger and Boyd and 1 sister, Helen “Dolly” Sparby.

To send flowers to the family in memory of Leon W. Suby, please visit our flower store.