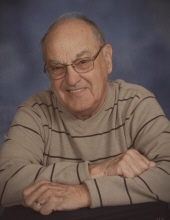 Interment will be held in Memorial Park Cemetery. Memorials may be directed to the family of Leon Sharp.

Leon Sharp was born February 17, 1936 in Mason City, the son of Grace and Ray Sharp. Leon graduated from Mason City High School in 1955. Leon served in the army in Fort Leavenworth, Kansas. He was united in marriage to Sandra Andersen June 14, 1958 and to this union two daughters were born. He later married Janice A. Kollman on November 27, 1971.

Leon worked at Frozen Foods, Higley’s Cold Storage and then retiring from Hardware Hank in 1998. Through all of the years, his customers became his friends. Leon loved gardening, flowers and antique shows. He also enjoyed sitting outside and talking to everyone that walked by. His best enjoyments were family, friends and his dog Heidi.

He was preceded in death, his wife Janice, his parents, and brothers and sisters.

To send flowers to the family in memory of Leon Ray Sharp, please visit our flower store.