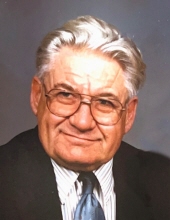 Visitation will be held on Friday, March 11, 2022, from 4 to 6 pm at Major Erickson Funeral Home, 111 N Pennsylvania Ave, and will continue one hour prior to the service time at the church.

Interment will be held in the Eden Presbyterian Church Cemetery.

Memorials may be directed to the family of Leo Schupanitz.

Leo was born on February 6, 1937, to Herbert and Marie Schupanitz in Elma, Iowa. On October 1, 1961, he married Irene Rieman. From this union, four sons were born, Brian, Bruce, Bradley, and Brent. The family resided outside of Northwood until moving to Mason City in 1963. Leo worked in excavating and roadwork for a majority of his adult life before retiring from Martin Marietta. He enjoyed camping, riding bicycle, traveling, and fishing.

Leo was preceded in death by his parents; two brothers, Jerome Schupanitz and John Schupanitz; one sister, Mary Pierce; and one niece, Karen Link.

To send flowers to the family in memory of Leo Joseph Schupanitz, please visit our flower store.